You can use the timeline above to browse the exhibitions and events by year.

Interested in knowing what show an artist was in? Want to learn more about a specific exhibition or event? Use our the search feature below to search our Exhibitions + Events archives! 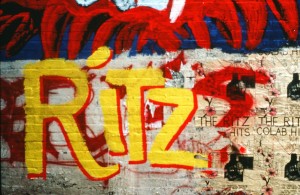 In the spring of 1983, three hundred artists descended on the Ritz Hotel at 920 F Street NW to present a wild and irreverent exhibition of visual art, sound, music, film and video, fashion, and performance. A joint effort by WPA and Collaborative Projects, Inc. (Colab) of New York City, the show brought together anti-establishment artists from two of the nation’s premiere urban art centers to challenge Washington’s elitist culture and to undermine, through their media of choice, the social and political status quo.

The exhibition commanded every square inch of the seedy, dilapidated 40-room hotel, from the walls, floors, and ceilings to the cracked windows and grungy carpeting. Every space and surface was up for grabs. Artists relentlessly splashed paint and scrawled across every dingy surface with an expressionism that at times edged into reckless abandon. Few of the works were signed and none were labeled. Some objects remained works-in-progress for the duration of the show, with artists returning to add to their own pieces – and to those of their compatriots as well.

Many of the New York-based artists [but interestingly, not those from DC] exhibited works that depicted or invoked political themes. The images were varied in materials and means of expression but united in their anti-government stance. Among such works was a portrait of then-President Ronald Reagan with blood on his hands, a scaled-down Washington Monument draped in black as if it were in mourning, and a painted canvas depicting the Statue of Liberty with real beer bottles attached to the surface. “Lots of us,” commented John Morton of Colab, “decided to do art work about politics. This isn’t a variety show. The reason we were interested is that it is here in Washington.” While some found the political messages repetitive, confounding, and lacking subtlety, certain works were singled out for their expressive clarity, including those that depicted political and social outcasts – the poor, the unemployed, and persecuted indigenous groups such as the Australian aboriginals – as heroes.

The deeply expressive nature of the Ritz experience inspired certain participating artists to pursue new possibilities in their work. Tom Ashcraft, Ed Bisese, Georgia Deal, and Carrie Meinberg-Burke, for instance, who had met one another just prior to the exhibition, collaborated on a project for the hotel that led them to form Dog Dream Project, a collective art group that produced work for the next six years. Alberto Gaitán, a Ritz steering committee member who contributed a 20-minute pre-recorded loop sound installation to the project, began a fifteen-year collaboration with Art Attack as a result. As Ashcraft recently commented, the Ritz had a lasting legacy as “a great energetic moment of creative engagement that I believe was genuinely felt by the organizers and participants.” Not everyone appreciated the exhibition’s aesthetics, however. One participant was disappointed especially with the show’s grungy excess: “The exhibit . . . . looks as if a bunch of reactionary New York punks had said to one another, ‘Hey, there’s this abandoned Washington building up for grabs: Let’s go down and trash it!’” For others, however, including Washington Post critic Paul Richard, the “sleazy and chaotic” excess was precisely what made the project work well. The building, however, was a fire hazard, which led city officials to shut down the project five days ahead of schedule.

Back to Exhibitions + Events
No Comments »