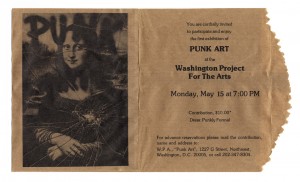 For us the punk years were fast, loud, and lots of fun…. In truth [Punk] was part of something bigger, a moment of generational change, and the initial breaking of the dam that had contained the art world since the 1960s. —Marc H. Miller, www.98bowery.com

It is rather a new breed of artists. —Gerald Silk, Punk, WPA exhibition catalogue

It was the late 1970s, and Alice Denney, the founder and first director of WPA, thought that “boring old Washington” could use some excitement. So she banded together with emerging artists in New York City to stage an exhibition of Punk Art—the world’s first—in the District.

The Punk movement originated not with the visual arts but with music promoted at club CBGB (short for CBGB & OMFUG, or Country, Blue Grass, Blues & Other Music For Uplifting Gormandizers) in the East Village. Artists Marc C. Miller and Bettie Ringma, curious about the club, stopped in one night to check it out. They were immediately hooked. Over the following months their art evolved until it corresponded conceptually with the CBGB musical culture. Concurrently, Punk magazine, which published its first issue in 1976, promoted CBGB and its bands, including Blondie, the Ramones, and the Talking Heads, in a signature fanzine/comic book style suited to a movement that rejected the intellectualization of art. As Miller later put it, Punk was “turned off by an overly intellectual art scene, [and sought] new audiences by embracing commercial and popular art.”

Denney, in seeking new and innovative art to showcase in Washington, asked Miller and Ringma for suggestions that would exemplify “the social and visual phenomena of the “Now.’” And there was no better choice than Punk. Miller and Ringma assembled for Denney a body of work by various Soho artists who represented facets of the movement. They were quickly joined by John Holmstrom and Legs McNeil of Punk magazine, who brought together works by artists in its circle. Denney hired bands to perform at points throughout the exhibition, screened Punk-style films, and organized a symposium on the meaning of Punk. A 28-page catalogue for the exhibition (online at www.98bowery.com) included a forward by Denney, interviews with scores of artists, and commentaries by Pop artist Andy Warhol and art historian Gerald Silk.

The exhibition opened at the WPA’s G Street galleries in May of 1978 to throngs of spectators, their enthusiasm fueled in part by vigorous pre-exhibition media coverage. Visitors encountered, among other things, tattoo artist Ruth Marten in the process of inking; Steven Kramer’s Destructive Mouse, a kinetic sculpture that damaged everything in its path; and Curt Hoppe’s portrait of Ringma and the Ramones, which had been signed by the group at CBGB the week before. Interestingly, a portrait of Warhol, which Neke Carson created using a paintbrush embedded in his rectum, was stolen but turned up a week later after a media blitz that pleaded for its return. Not everyone found such work interesting or even cutting-edge, however: The Washington Post was already calling Punk passé. Denney, who wore a rhinestone-studded dog collar to the opening, undoubtedly disagreed.

John Stascak. White Noise. A one-night installation of 1800 watts of light and noise.