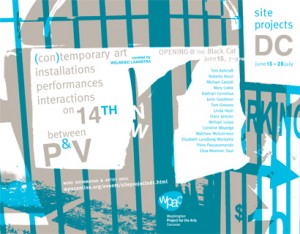 Ten established local artists were invited to create 2×2′ pieces, which were displayed unlabeled and were sold anonymously. Each artist invited nine others to participate, for a total of 100 works at Flashpoint Gallery.SNEAKERS

An exhibition and party at Heineman Contemporary Art that showcased works by contemporary artists who explored color in original ways. Curated from ArtFile by Zoe Myers.Kobe AD EP Shoes

A continuation of the 2005 Turning the Page series, in which WPA staff and interns curated small exhibitions of artists from the Artist Directory. Curators: Amy Kraushaar and Anna Wonson. Location: Coldwell Banker Dupont Circle office.ADIDAS